“Our animals were as thin as straws of grass but now they are looking very fat and healthy,” said Agnes Tengovandu-Tjindo, of Otjozondjou, a small village in Erongo, Western Namibia. New systems of hydroponic fodder production, like the one recently set up in Otjozondjou, are part of the solution to recovery from, and resilience to, drought.

Namibia is recovering from one of its worst droughts in recent history. In some parts of the country, the drought started as far back as 2013 and went on to affect the greater parts of the country in 2018/2019. People continue to face trouble growing their crops, including for fodder to keep their valuable animals alive.

Hydroponic fodder production can help livestock owners weather shocks like the drought. The greenhouse production systems involve supplying cereal grain with necessary moisture and nutrients to enable germination and plant growth in the absence of a solid growing medium. The method requires only seed and water as production inputs with modest labour inputs, and with no fuel required for harvesting and post harvesting processes. The resulting green shoots and root mat are harvested and fed to livestock. The process can help ensure animals have enough feed, even in adverse conditions, as growing fodder this way takes about a week, compared to several weeks with normal methods.

These methods are catching on in drought-affected areas Namibia, thanks in part to a United Nations Central Emergency Response Fund (CERF)-backed project which was implemented by the Namibia National Farmers Union (NNFU), Namibia Emerging Commercial Farmers Union (NECFU) and the Ministry of Agriculture, Water and Land Reform, with support from the Food and Agriculture Organization of the United Nations (FAO).

Through the CERF-funded project, 79 greenhouse hydroponic fodder production systems have so far been set up across seven regions in Namibia, namely: Ohangwena, Omusati, Hardap, Kunene, Omaheke, Kharas, and Erongo.

“The [greenhouse] fodder production system has greatly changed my approach to farming as far as supplementary feed production is concerned,” said Agnes, the 36-year-old farmer in Otjozondjou. Agnes is one of the over 3 000 farmers across seven regions in Namibia who have received training on hydroponic fodder production as part of the project’s interventions.

The project, which began in 2020, has benefited close to 3 350 households, 40 percent of those are headed by women. Like many farmers who were left in despair by the punishing drought situation, Agnes felt fortunate that her remaining core breeding livestock has been rescued from imminent starvation. “I lost a great number of my livestock and was left with only a few cattle and goats that I was also struggling to keep alive,” she said while pointing to a few of her cattle rested under a camelthorn tree not far from her homestead.

“Finding good grazing was a challenge that required walking long, strenuous distances, and buying bales of fodder was becoming too expensive,” she explained. Now, Agnes and her community are reaping the benefits of the hydroponic innovation, with close to 15 households receiving bags of fresh fodder each week. “We have created a system that not only ensures that every household receives fodder from the greenhouse but also makes room for every beneficiary to get involved in the fodder production process,” said Agnes.

Agnes said she has taken it upon herself as the lead farmer entrusted with members, especially women, on fodder production. Agnes added that the fodder production process is fairly easy when done right. “The fodder takes around six to seven days to grow with one kilogram of fodder requiring about three to four litres of water,” she explained.

Agnes also mentioned that her community has taken ownership of the greenhouse structure because it has become an integral part of their survival. “Even if the rain returns we will still keep making use of it and safeguard it because with climate change being an undeniable reality, droughts can strike at any time,” she pointed out. “In that regard, I would like to thank FAO, the UN’s CERF, the Ministry and all the other implementing partners for the much-needed intervention and pray that they keep rendering such needed assistance in the future,” Agnes concluded.

Similar sentiments were echoed by farmers in the southern parts of the country as well. Anna Isaacks, a pensioner from Amalia, a small farming outpost near Gibeon in the Hardap region, is also full of praise for hydroponic fodder production. “There is now hope where there was no hope,” Anna said. The hydroponics greenhouse is stationed just a few metres from her family residence. “I am very happy that this structure came to us as it has been very helpful, especially since we are now able to feed our livestock and save them from dying,” she said.

Karel Swaartbooi, Anna’s neighbour who also benefits from the hydroponic fodder production to feed his flock of goats and sheep, also agreed that the innovation has been very beneficial to him and other households around the area. “I too lost a lot of my livestock due to the prolonged drought and was left with only a few sheep and goats but at least now we can make use of the fresh water available to produce fodder to save our animals,” Karel said.

In addition to the hydroponic fodder production systems and training, the CERF-funded project has vaccinated livestock against various diseases and treated them for both internal and external parasites. Multivitamin metabolic injections were also administered to boost livestock immune systems and overall health, thereby improving their resilience to the next grazing shortage. 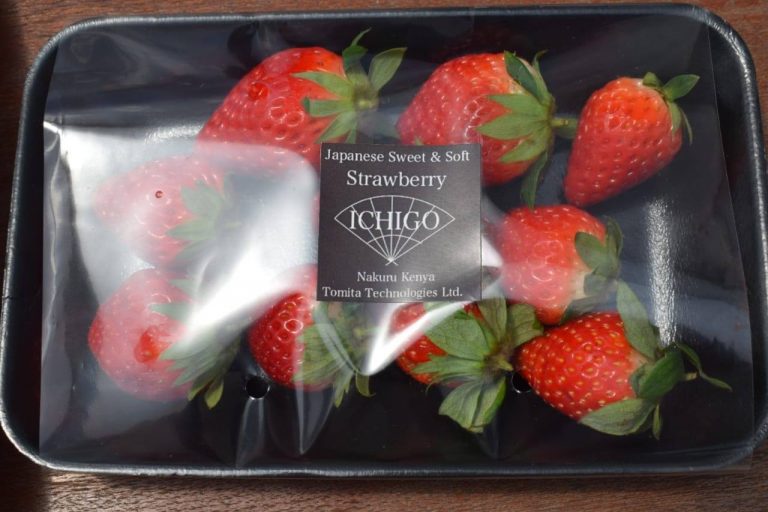 Nakuru County in Kenya has turned to technology in a bid to improve strawberry production.