Kshs. 22 Million worth of seeds, seedlings and inputs distributed to Counties

The Kenyan government has released seeds, seedlings and other inputs worth Ksh 22 million to be distributed to farmers in the counties covered by the Drought Resilience and Sustainable Livelihoods Program (DRSLP).

The State Department for Crop Development and Agricultural Research is implementing three projects funded by a loan from Africa Development Bank (AfDB), a grant from the Global Agriculture and Food Security Programme (GAFSP) and the Government of Kenya.

The projects are Drought Resilience and Sustainable Livelihoods Program in the Horn of Africa (DRSLP-K), Small Scale Irrigation and Value Addition Programme (SIVAP) and Rural Livelihoods for Adaptation to Climate Change (RLACC).

During the flagging off at Kilimo House yesterday, the Chief Administrative Secretary (CAS) State Department for Crop Development and Agricultural Research, Ministry Of Agriculture, Livestock, Fisheries & Cooperatives Anne Nyagah   said that so far the project has reached 61,796 households as beneficiaries who are mainly pastoralists and agro-pastoralists.

“The DRSLP projects include irrigation schemes, water pans, earth bams, boreholes, shallow wells and sand dams. Some of these projects are either complete or are at their final stages,” said Nyagah.

She added that in order to address their need for food and nutrition security as well as income generation, the Ministry through the Project Coordination Unit (PCU) has planned to set up demonstrations for food crops (including kitchen gardens), fodder production and irrigated agriculture as COVID 19 response initiative. “In the March -May rains, the PCU purchased seeds and seedlings worth Kshs. 7.8 million which were distributed to 11 SIVAP counties,” said the CAS.

The consignment included vegetables like Amaranthus, Spinach & Cowpeas, Pulses and cereals like beans, green grams and finger millet. It also had fodder like desmodium, brachiaria grass and lucerne. Fruit trees like avocados, passion, macadamia, tree tomato among others were also included. 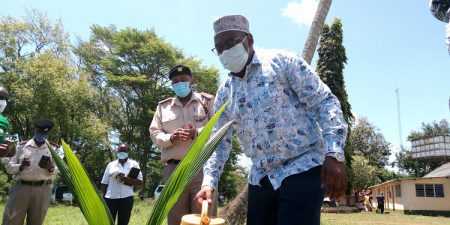