Ndaro-ini coffee farmers in Mathira, Nyeri County have beat all odds to emerge the highest-paid coffee farmers in the country. The farmers under Ndaro-ini Coffee Growers received Kshs. 98.2 million for their coffee this year with each farmer receiving Kshs. 115 per kg. As per their agreement, the Kshs. 15 goes to factory costs while the farmer pockets the rest. The farmers opted to sell their coffee through direct marketing to Trabocca, a Netherlands company which is buying their coffee for the second time.

But it has not been a smooth journey all through as the Chairman Joseph Mukuha tells Kilimo News. Initially, they were members of Gikanda Coffee Farmers Co-operative Society which was made up of Ndaro-ini factory and two other factories. “Trabocca approached the society in 2018 with an offer of buying our coffee as it is known the world over for its quality. There was a lot of opposition because of various interests which made it hard to strike a deal with the company.

We as Ndaro-ini factory farmers decided to talk to Traboca and the company insisted to talk to the farmers and after meeting them, farmers agreed to sell their coffee,” says Mukuha. Negotiations started in April 2018 and went all the way towards the end of that year when they struck a deal.  After agreeing on the way forward, the co-operative department refused to register them as a co-operative on their own and insisted that should they remain a part of Gikanda. “There was no way we could have remained together and we were not selling our coffee to the same buyer. We couldn’t allow anything to come between us and the deal and after a lot of opposition and sabotage, we managed to register Ndaro-ini Coffee Growers as a Public Limited Company and since then we have never regretted,” adds Mukuha.

In 2019 when coffee prices in the auction were low and farmers waited for them to rise to sell their coffee, Ndaro-ini had already paid their farmers in February. But having been given raw deals in the past, the coffee farmers had given Traboca a condition. The company had to pay for the coffee before carrying it away from their stores. “Trabocca agreed and they offered to buy a kilo for Kshs. 100 as the minimum price. If the market improved, they promised to increase the price but for now, we have an agreement of Kshs. 100 per kilo as the minimum they will pay for our coffee for the next three years. After that, we will discuss renewing the contract. This is the second year,” says Mukuha. The issue of factory expenses during pulping was also discussed and the company agreed to pay an extra Kshs. 21 per kilo for this. The Chairman says they agreed to be doing an audit of the funds every year to decide where to allocate them in case they had some balances after meeting the factory maintenance costs.

Mukuha says they are happy as they made the right decision since membership has grown. They started with 900 farmers & currently they have more than 1400 members. Production has also risen from 588 kgs. last year and now they are almost hitting a million. “The best thing about all this is that our farmers are assured of a market for their next season’s produce. They can also budget effectively as they are assured of Kshs. 100 per kilo as a minimum. A farmer can plan on how to control their expenses since they know what to expect. This also motivates them to increase production in order to earn more.  “All our workers are trained at Coffee Research Institute and we buy inputs for our farmers in bulk at a reasonable price from local suppliers. We also established a spraying unit which sprays the farmers’ coffee to ensure uniformity and quality of our produce,” says Mukuha.

However, the ghosts of leaving a cooperative society keep haunting them as they did at the beginning of this year.  Gikanda Cooperative Society was against them using their license to pulp and move their coffee which meant they could not sell. After a long protracted battle involving the Nyeri County Government and Agriculture and Food Authority (AFA), Nyeri Governor Mutahi Kahiga stepped in and the parties agreed on a short term solution to enable them to sell their coffee. They also agreed to work on modalities to ensure they were given their own pulping and coffee movement licenses.

The Chairman, however, says the benefits outweigh the challenges. “Traboca has helped us to improve our infrastructure. They gave us a long term loan of Kshs. 7.5 million which we agreed to pay in three years. The loan went towards the installation of an eco-pulping machine which uses a little amount of water. This has improved the quality of our final product. We have also constructed 20 modern and permanent coffee drying tables,” he says. Traboca is also leading an initiative of giving the coffee farmers a smokeless cook-stove which also uses solar power.

On their future plans, Mukuha says there are several. “Together with Trabocca, we are planning to establish a coffee seedlings nursery. We will also establish a demo farm where we will plant all coffee varieties to ensure our farmers get the best knowledge in coffee production. Finally, we are also thinking of setting up a coffee shop in the near future,” 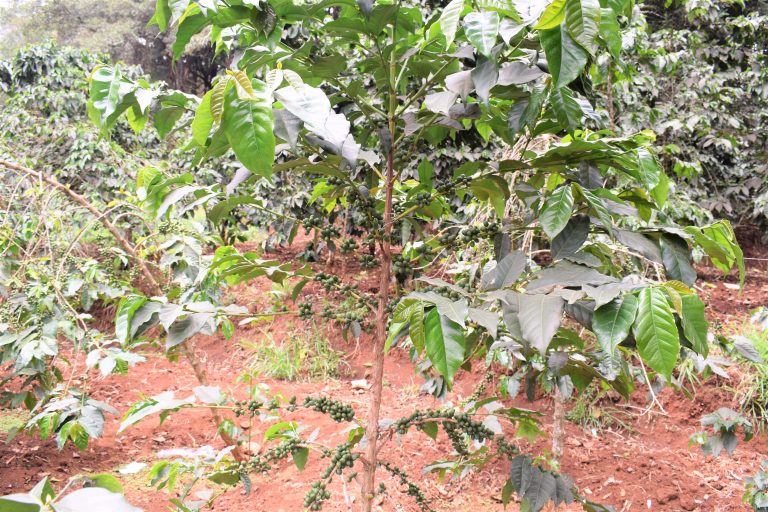