Food and Agriculture Organization (FAO) of the United Nations Director-General QU Dongyu has thanked the Russian Federation for boosting the fight against the Desert Locust outbreak in East Africa by making a $10 million contribution to support FAO operations in Ethiopia, Kenya, South Sudan and Uganda.

“We are grateful to the Russian Federation for its contribution to help fight the alarming impact of the Desert Locust upsurge. It will help efforts to stop the spread of the locusts and to safeguard the livelihoods of farmers and their families who are at risk from this scourge,” Qu said.

East Africa is experiencing its largest invasion of Desert Locusts in decades. This is the most destructive migratory pest in the world and can form dense and highly mobile swarms capable of covering a distance of up to 150 km in a single day.

Desert Locusts are ravenous eaters that consume their own weight per day, targeting food crops and forage. Just a single square kilometer of swarm can contain up to 80 million adults, with the capacity to consume the same amount of food in one day as 35,000 people.

There can be an exponential increase in locust numbers with every new generation of breeding: a 20 time increase in their numbers after three months, 400 times after six months, and 8 000 times after nine months.

For these reasons, Desert Locust pose a major threat to food security and rural livelihoods.

In 2020, the global Desert Locust situation deteriorated as favourable climatic conditions promoted widespread breeding of the pest in East Africa, Southwest Asia and the area around the Red Sea.

The situation remains alarming. In the six East African countries worst affected or at risk of locusts – Ethiopia, Kenya, Somalia, South Sudan, Uganda and Tanzania – around 20 million people are already experiencing acute food insecurity, and a further 15 million in Yemen, which is also being affected by the pest.

FAO considers its fight against the rapid spread of Desert Locusts in East Africa one of its top priorities. The UN agency has issued an emergency humanitarian appeal totaling $153.2 million for surveillance and control operations and to support farmers’ livelihoods.

The assistance package includes surveillance and control operations, pesticides and their means of delivery (agricultural leases, mobile and portable sprayers), as well as food, fodder and seeds for farmers and pastoralists.

So far FAO has received $117.3 million in donations from national governments, foundations and other organizations but there is a shortfall of $35.9 million.

Russia’s contribution will help to bridge that gap and the funds will be used  to buy pesticides, fuel, vehicles and sprayers, as well as for the employment and training of personnel for the pest’s elimination. 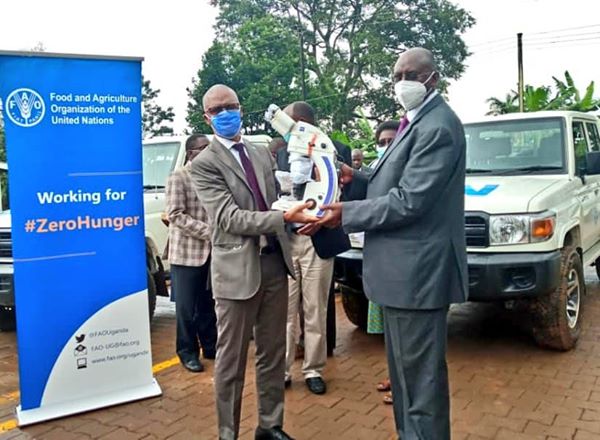 Uganda’s Ministry of Agriculture, Animal Industry and Fisheries( MAAIF) has received support in form of

Turkana County is now the epicenter of Desert Locusts.  According to the Food and Agriculture