The economy of Nyeri County is
expected to grow tremendously
after the rehabilitation of the Nairobi – Nanyuki metre gauge railway
line. It is expected to act as a catalyst to trigger growth in logistics companies, agricultural value addition companies and
cottage industries along the railway
line.
The project is expected to spur social-economic development on the Central Region Economic Bloc (CEREB). This project will also link the county with the larger Lamu Port and Southern Sudan Ethiopia Trans￾port Corridor (LAPSSET) which was
enshrined in Vision 2030.

Nyeri boasts of three railway stations
which are situated in Karatina, Kigan￾jo and Chaka townships.
The 235 kilometre railway line which
collapsed in the nineties will now
boost the economic growth of the
region through provision of a faster,
reliable, safe and secure transport
means of cargo after its refurbishment
by the national government.
The railway which traverses six coun￾ties including Nairobi, Kiambu, Mu￾rang’a, Kirinyaga, Nyeri and Laikipia
is a major milestone for the counties
as it provides an alternative means of
transport.
The revival of the railway will ensure
agricultural produce like wheat, coffee,
tea, horticultural goods and maize,
cement, animal inputs, fertilizer,
household goods, petroleum products,
livestock and livestock products are
transported in bulk at a cheaper price.
This will also ensure convenience and
efficiency of the cargo.

Tea farmers in the region have lauded the move saying the region has 22 tea factories.
Their tea products can be ferried to
Mombasa auction by rail.

“Vivo Energy, a large multi-nation￾al oil company opened a depot in
Nanyuki with a storage capacity of
11.5 million litres to serve the region
as a common user facility. Currently,
distribution level stands at five million
litres. With rail operations, it is project￾ed that the depot’s maximum monthly
capacities will be achieved by early
next year,” said James Siele, Kenya
Railways Business, Commercial and
Operations Expert during a recent
stakeholders meeting.

The passenger train which will also be
in operation on this route will run from
Nairobi to Nanyuki with stoppages
along the route. It will consist of six
coaches run by a-62-class locomotive.
This will be a major tourist attraction
as the Kenya Railways plan to set up
weekend party trains traversing the
beautiful landscape.

The train will ferry about 1,000 peo￾ple alighting at various destinations.
The passengers will be able to enjoy
the sceneries of the populated Kiambu
County to the rolling hills of Murang’a
and then the lush greenery of Nyeri to
the rich savannah grassland of Laikipia.
Kiganjo, Karatina and new station at
Chaka are expected to be busy passen￾ger hubs.

Nyeri Governor H.E Mutahi Kahi￾ga added that infrastructure for land
earmarked for industrial development
in Kiganjo will be improved to ensure
the industrial land set aside in Kiganjo is
utilized.
The infrastructure will include rehabil￾itating roads, installing electricity and water, among others in the industrial
town which served as a train station
before rail transportation collapsed.
The governor said the plots in the
industrial satellite town on the outskirts
of Nyeri town were earmarked for de￾velopment over 30 years ago, but have
never been developed.

He said the initiative will enable people
who intend to set up go-downs and who
can provide cargo for transportation on
rail to start building.
“The revival of the line will see the
idling industrial plots around Kiganjo
developed by investors. Kiganjo was
sent to its deathbed when we lost the
line. Many businesses closed down
after the collapse of the line,” added the
governor.
Kenya Cooperative Creameries based
in Kiganjo is also intending to expand
business on value addition lines where￾by the dairy products will be ferried via
the line.
Mukurwe-ini Wakulima Dairy Ltd
chairman Muhika Mutahi said that the
company is also ready to take advantage
of the railway and transport the milk
products to other corners of the country.
Nyeri Trade, Tourism and Cooperatives
CEC Diana Kendi noted that the youth
from the region will also benefi t from
jobs created due to an increase in goods
transportation.
CEREB CEO Ndirangu Gachunia noted
that the bloc which brings together 10
counties from Nakuru, Nyeri, Nyan￾darua, Meru, Kiambu, Embu, Laikipia,
Kirinyaga, Murang’a and Tharaka Nithi
has 10% of the Kenyan Population and
28% of Kenya Gross County Product
(GCP) worth Ksh 2.6 trillion.
“This is intended to unleash this eco￾nomic behemoth that the world has not
fully discovered and utilized to its full
potential. We have a superior infrastruc￾ture, the biggest water towers and the
requisite human resources to support
an industrial revolution. Our people are
hardworking and the region is chris￾tened the cradle of entrepreneurship,”
said Gachunia.
CEREB chairman, who is the Nyan￾darua Governor H.E Francis Kimemia
however called for extension of the line
to Meru and Nyandarua counties so that
each of the ten counties in the central
region benefi t from the infrastructure.
“Governors from this region want to say
that we fully support this noble project
since apart from agricultural products
we have minerals that can be transported
through rail. It will make doing busi￾ness cheap hence we will benefi t,” said
Kimemia.
Laikipia Governor H.E Ndiritu Muriithi
noted that the road transport has been
the only alternative mode of transport
for bulky agricultural cargo as well as
commercial goods such as oil.
“Compared to rail, road transport is
expensive both to farmers and business
people and greatly shortens the lifes￾pan of our highways,” added governor
Muriithi.
The revival of the railway line is part of
H.E President Uhuru Kenyatta’s plan to
accelerate implementation of promised
development projects in the region.
There are plans to extend the line to Isio￾lo to link up the region to the LAPSSET.
There will also emerge new modern pro￾duce markets along the corridor where
our farmers can trade their commodities
with assured cheap transport.
The President is expected to offi cially
launch the refurbished railway line soon.
It is one of the mega projects in the
region done by the national government. 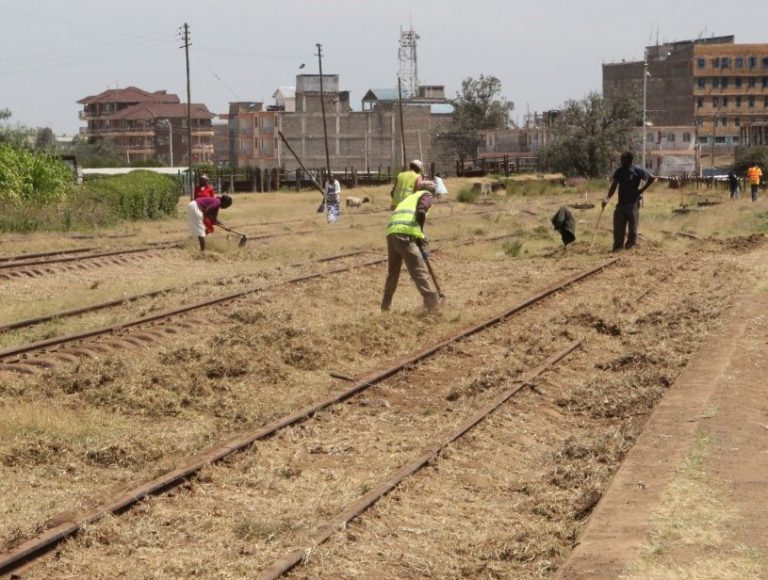