There is big potential in the Fisheries and Aquaculture sub-sector in the country as fish demand is higher than the production. This was said by Agriculture CS Peter Munya as he presided over the commissioning and handing-over of Aquaculture Business Development Programme (ABDP) vehicles to the first six implementing Counties and the Programme Coordination Unit at Kilimo House.

The CS said the government launched a large-scale aquaculture support programme under the Economic Stimulus Programme (ESP) during the period 2009 – 2013 to promote smallholder aquaculture fish production through targeted support for input supply, fish production, post-harvest management and related activities. The ESP achieved a rapid expansion in the productive infrastructure in the sub-sector, including regions of the country with little history of fish production or consumption. However, there still remained grey areas which needed to be addressed which include the provision of good quality fish feed and seeds, provision and backstopping of technical services, capacity building in fish processing and value addition, and strengthening of linkages between producers and market as well as other actors across the value chain. He noted that the County level extension services on fisheries and aquaculture are barely functional because of inadequately skilled extension service providers, lack of mobility and lack of resources needed for effective service provision. “I, therefore, request Counties to streamline aquaculture into their County Integrated Development Plans (CIDP) and this will make the Subsector a priority for investment,” said the CS.

Munya added that some interventions to address challenges in the subsector have been put in place by the government. In April 2019, the Government of Kenya through the State Department for Fisheries, Aquaculture and the Blue Economy with support from International Fund for Agricultural Development (IFAD) launched a Kshs 14.9 Billion Programme dubbed Aquaculture Business Development Programme (ABDP) which also included a contribution from the Food Agriculture Organization (FAO). The Programme’s objective is to support aquaculture farming in 15 Counties with high aquaculture potential. These are Nyeri, Meru, Kirinyaga, Embu, Tharaka Nithi, Kajiado and Machakos in the Central/Eastern Region and Kakamega, Migori, Homa Bay, Busia, Kisii, Kisumu and Siaya in the Western Region.

The Smallholder farmers will be organized into Smallholder Aquaculture Groups (SAGs), The Program will support Counties in making the Mini-fish Processing Plants (Meru, Nyeri, Kakamega and Migori) develop into Aquaculture Business Hubs. Over 5,500 youths will be supported through Aquaculture Support Enterprises (ASEs) through MSMEs related interventions, and support over 63,900 women to form viable aquaculture related enterprises.

Under this program, sixteen vehicles have been procured for use by Counties and the Programme Coordination Unit. Today the first vehicles were handed over to the first 6 counties under ABDP implementation namely Nyeri, Meru, Kirinyaga, Homa Bay, Kakamega and Migori Counties and the ABDP Programme Coordination Unit. The remaining 9 Counties will receive the vehicles in the next Fiscal Year.

IFAD Country Director (and Head Eastern Africa & Indian Ocean Hub) Esther Kasalu commended the government as the County and sub-county implementation teams are in place. “We further acknowledge the fact that these teams are mobilizing farmers, despite the reduced mobility due to COVID-19. In Central Region (Nyeri, Kirinyaga, Meru, Tharaka Nithi, Kiambu, Embu, Machakos and Kajiado) to sensitize communities to eat fish with improved recipes for improved nutrition. They have also embarked on stocking dams with fingerlings. The project is to support existing companies both public and private who were already producing fingerlings….with infrastructure and inputs,” said Kasalu.

She added that on the Western side (in Kisumu; Homa Bay; Busia; Siaya; Kisii, Migori, Kakamega) the project is working with County governments to assess the impact of floods on the fishing communities so that it can be determined how to support the communities.

“We appreciate the Government of Kenya for contributing facilities for the regional office in Kisumu which have been fully rehabilitated and are fully operational. With these vehicles, our extension officers will now be able to reach farmers, even and more so, in remote areas, so that those who are interested will get the support required,” she added.

Kasalu urged the government to ensure that the vehicles are used exclusively for activities of the programme. She also called for speedy implementation of the programme as it was behind schedule and there is a dire need for food production, supply and nutrition.

“I want to remind the State Department of fisheries and our County Governments that we are counting on you to meet the country needs of not only food but also nutrition, to avoid a food and nutrition crisis. Now there is no excuse for farmers to be wanting of technical knowledge and advisory services on how to fish farm,” opined Kasalu.

She added that IFAD recognizes the dire need of mobility, particular during this COVID-19 period, to speed up the production. To assist in this, they are expediting the procurement of 60 Motorcycles. Nyeri, Kirinyaga, Meru, Homa Bay, Siaya and Kakamega counties will receive 10 motorcycles each.

Prof. Micheni Ntiba the Principal Secretary State Department for Fisheries, Aquaculture and the Blue Economy urged Kenyans to consume fish as it is a great source of protein.”As we embark on our duties, I call upon each one of us to be fish consumption ambassadors and preach the gospel of eating fish because our per capita fish consumption is very low, and for the aquaculture sub-sector economy to flourish, Kenya must be a fish-eatingfish-eating nation. My Department will continue supporting the National Eat More Fish Campaigns and I request that you replicate the same at the county level to ensure that we reach the global average of 20Kgs/person/year by the time the Programme comes to an end. Remember that it is well researched and documented that no country, even if they have seas and lakes will ever develop their fisheries as a business without a robust and elaborate Eat More Fish Campaign supported by Government,” said Prof. Ntiba. 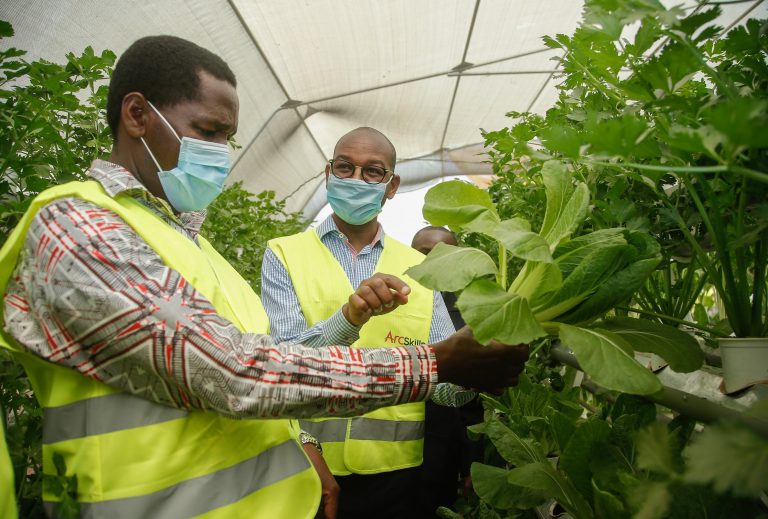